Neighborhood Projects Bring Smiles to Others’ Faces—From a Safe Distance 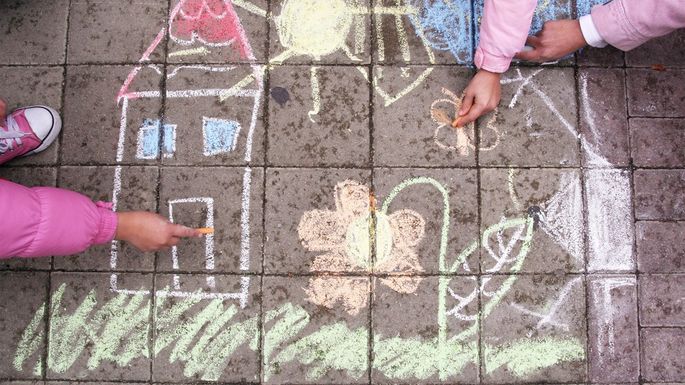 In this time of coronavirus and social distancing, plenty of people are stuck in their homes, trying their best to ward off boredom and keep their spirits high. But somehow, communities around the world have found a way to do just that, for themselves and others.

These friendly folks have found creative ways to brighten up their neighborhoods with social distancing–friendly activities. These projects not only help pass the time, they also bring some hope to fellow neighbors.

Read on to learn some great ways communities have come together during this difficult time—and maybe get some ideas to help bring some fun to your street!

Take that holiday decor out of storage

People have been brightening up their neighborhoods with lots of decorations—holiday decorations, that is! Christmas twinkle lights seem to be a popular choice among homeowners, but it seems people will go with any season. With everything from Valentine’s hearts to spooky Halloween pumpkins, neighborhoods are being filled with all kinds of festive looks.

And not only are these decorations fun for neighbors to look at as they pass by in their cars or on a walk, they’re also fun to put up. Nothing says “finding something to do” on these long quarantine days like unpacking all those boxes of Christmas decorations!

As the Washington Post reports, this practice is helping people, especially children, cheer up in this time of uncertainty.

Amanda Boudreaux, a mother of two, points out that her daughters love seeing decorations light up the street.

“Every time we go outside … they get excited all over again, especially when it’s nighttime,” she says.

Who doesn’t like a scavenger hunt? They’re fun for all ages, plus they’re a great excuse to get outside (while still practicing social distancing).

The New York Times reports that some kids have been participating in a different kind of scavenger hunt, seeking out teddy bears that neighbors have left propped up in windows, on porches, or even hidden in trees.

“It’s really exciting when you walk past, because there are so many different bears,” Stevie-Lee Tiller, 13, said of the scavenger hunt in her community in New Zealand. “There’s little ones, and some are, like, massive. There’s stuff like emoji pillows, and there’s Minions.”

No matter which bear is waiting in the window, it seems the #TeddyBearHunt has brought extra fun to neighborhoods worldwide, according to Time. Filling windows with cute, cuddly stuffed animals seems to be a great way to give your neighborhood kids a reason to smile.

Colorful chalk drawings can always brighten up a sidewalk. But in these days of social distancing, a beautiful chalk drawing, or note, can mean so much more to those out stretching their legs.

After a Facebook post (via Fox10 Phoenix) encouraged Americans to “chalk your walk,” and leave messages for others to see during this time of uncertainty, neighborhoods have become overrun with beautiful chalk drawings and notes of encouragement.

While some kids are leaving chalk notes to friends on their driveways, others are writing jokes like “Why don’t scientists trust atoms? Because they make up everything!” reports Nola.com, a New Orleans news site.

One community even worked together to create a neighborhood art museum.

Daphne Sashin, a Northern California mother of two, organized the project by asking her neighbors to draw pictures on their sidewalks and driveways so everyone could enjoy some colorful pictures as they walk or ride their bikes past, reports CNN.

“The idea was this would be something that would brighten everyone’s day, and it would bring us together as a community, even though we can’t physically be together,” Sashin said.

Stepped out for some fresh air during a break today and stumbled across this. The neon colors lit up my heart, the simple message reminded me NOT to fear those I see out and about and to smile at passers-by. #ChalkTheWalk. 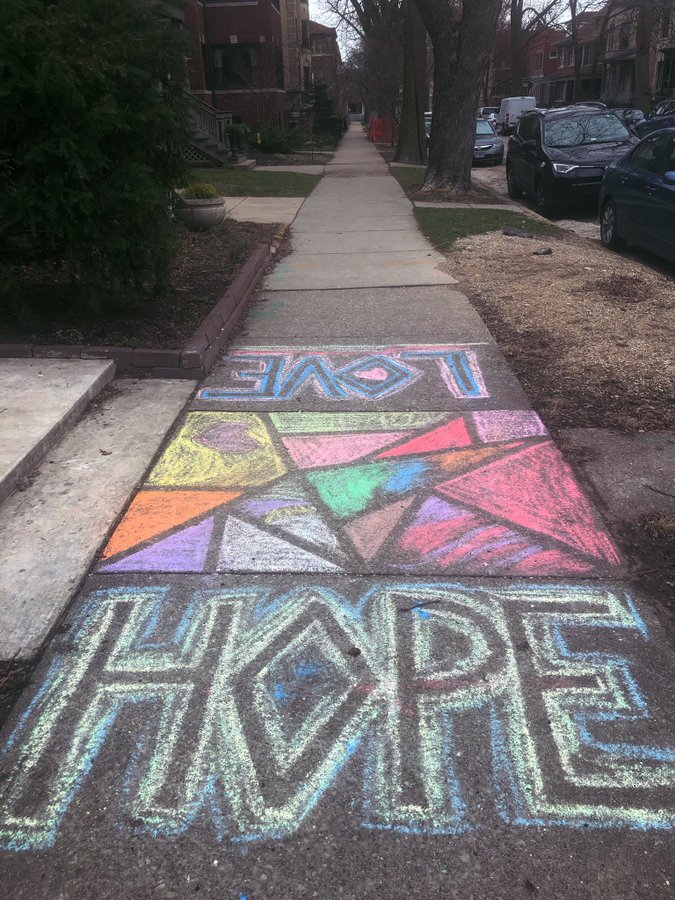 Display drawings in your window

When kids need something to occupy their time during this time of quarantine, one easy (and creative) solution is to bust out those markers and construction paper for some fun art projects. But what to do once that masterpiece is complete? 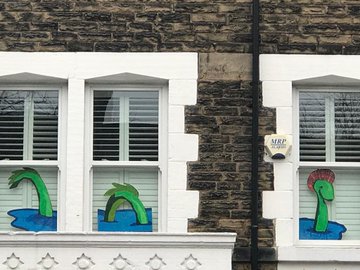 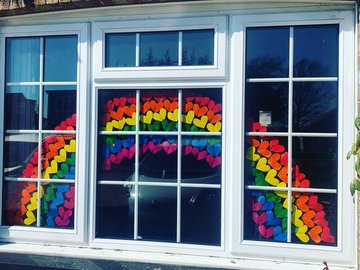 Families all over the globe are showing off their kids’ drawings in the windows of their home so that neighbors across the street, or walking by, can enjoy the colorful art. It’s an easy and fun way to add some color to the neighborhood.

While drawings can come in all shapes and sizes, some popular drawings have included pictures of rainbows, People reports.

“The neighbors have already been interested and it has been lovely to see smiles on people’s faces as they walk past the house,” says Danielle Oliver of Sunderland, England.

Celebrate one another with a parade

While decorating your house, the sidewalk, and even your windows with colorful drawings might be fun, one community decided to liven up their neighborhood with a social distancing–friendly dinosaur parade.

According to the Milwaukee Journal Sentinel, people dressed in inflatable dinosaur costumes and walked in a line as neighbors enjoyed the parade from a distance.

But a parade doesn’t necessarily have to be dinosaur-themed. In fact, plenty of other communities have celebrated their neighbors’ birthdays with a parade of cars giving a honk.

It’s definitely a parade, and a birthday, they’ll never forget! 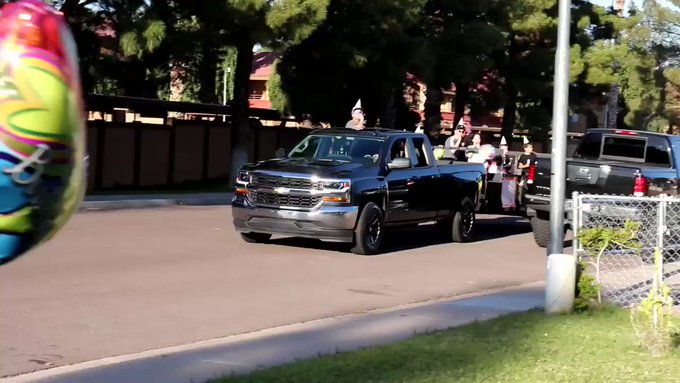 Related Articles
COVID-19 The typically quiet late summer period may be the hot selling season of 2020. Associated Press Megan Johnson — Globe correspondent April 9, 2020 3:32 pm It was supposed to be the typical spring boom for real estate. But thanks to the coronavirus pandemic and subsequent economic downturn, what was expected to be a thriving sales season has hit a wall. On the real estate listing site Zillow, there’s already been […]
First Time Home Buyers 1st Time Homebuyer Help -is a Fixer Upper for you? What First-Time Homeowners Should Consider When Purchasing a Fixer-Upper If you’re considering a fixer-upper, start by researching properties in your area. Note that the average listing price for a home in Lexington is about $1.27M; that puts a fixer-upper in the area at an average of about $766,360, since homes needing improvements usually cost about […]
Downsizing How to Let It Go – Emotions of Downsizing  The closer you get to downsizing, the more you will begin to experience uncertainty. Your emotions may try to persuade your decision. Don’t be intimidated by the emotions of downsizing! Let it go! This is a good opportunity to get excited about your new lifestyle. Answer these questions before you begin downsizing. What is your […]